by Fred Barlow
Copied with permission from Profiles in Evangelism, ©1976 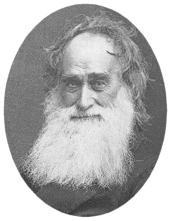 When I think of Robert Moffat, I am rightly reminded of the Scripture in Zechariah 4:10, which witnesses, "For who hath despised the day of small things?"

It seemed a small thing to some godly men in a southern Scotland church when a boy about four years old, from a home of poor but pious parents, knelt at an altar to pray. His decision was despised by the elders as one who was too young to understand. Thank God, one unnamed, unknown-to-us brother bothered to kneel in prayer with "Robbie."

Moffat may well have been converted to Christ then — if not, it was the commencement of a chain of events that led to his conversion and to the opening of doors of evangelism to the uncharted depths of the dark continent of Africa.

In his mid-teens he left home for High Leigh, near Liverpool, England, to begin work as an undergardner. It was there that Moffat's spiritual convictions were confirmed and he became a member of the Methodists. And it was on a walk from High Leigh to Warrenton that another event occurred which would engineer him into evangelism in Africa. He saw a sign announcing a missionary meeting. On such a small thing as a poster, God prompted the heart of the youth to purpose to become a missionary. Moffat attended the meeting and there is every evidence he got the message for shortly afterward he contacted Rev. William Roby, the Methodist preacher in Manchester, and was soon recommended to the London Missionary Society. At the age of twenty-one, Moffat reached South Africa.

His earliest ministries were treks taken into the interior. There were few railroads or roads and oftentimes those were washed away by rains. Travel was difficult, dangerous and often death-bringing. Rivers, rocks, swamps, and forests had to be avoided or mastered somehow. Intense heat by day and chill cold by night complicated travel. Always there were the wild beasts: lions, jackals, hyenas, crocodiles, snakes, monkeys and, worst of all, warlike and untrustworthy native bushmen. Such journeys were not often undertaken by those who knew the country well, and to a newcomer like Moffat such treks were deadly dangerous! But Moffat, motivated by his missionary call, meant to master all such obstacles. He gradually became physically acclimated to Africa's extreme climates. He learned the country and became proficient in its customs and its languages, and he developed the great power of leadership that was to be his badge and make him a blessing to multitudes.

In 1817 he set out for the kraal, or village, of the Namaquas where the chief, Afrikaner, a blood-thirsty butcherer, was converted. That conversion has been considered one of the great accounts of the grace of God on the mission fields. On that trip he saw for the first time the Kurumon River and the Bechuanas, the peoples with whom he would spend most of his long missionary ministry.

The Bechuanas' reception of Moffat's ministry ranged from stony indifference — to steeled intolerance — to incorrigible rejection. Moffat, who had now married an English sweetheart, "saw no reward for untiring work." That work, by the way, consisted of being a builder, a carpenter, a smith and a farmer all in one; while at the same time preaching.

Probably one of the most momentous events in Moffat's ministry was not preaching but attempting to defend his Bechuanas from the warring Zuluas. He did not avert a war, but procured firearms and equipped his people. The Bechuanas conquered the Zuluas and, realizing Moffat's bravery and compassion in their behalf, they began to respect him as a friend.

It was twelve more years before his message bore the fruit of revival. Suddenly the meeting house was crowded. Heathen songs were not sung in the village and dancing stopped. Prayers came to the lips of the Bechuanas, and the songs of Zion were sung. They began to give up their dirty habits. Converts were recorded, then time-tested, then baptized. Other tribes, hearing the news, sent representatives to learn of the white man's teaching. Moffat often would return with them and thus the revival message and results spread.

It was then that Moffat realized he must concentrate on translating the New Testament into the language of the people if they were to learn God's Word and live God's way! And, customarily, he not only translated the text, he procured a press and printed it.

Moffat returned to England only one time before returning to die. On that visit he persuaded Livingstone to go to Africa instead of China. Livingstone built mightily upon the foundation that Moffat had so ably laid, yet, incredibly, Moffat outlived Livingstone ten more years.

He had opened jungle villages to the Gospel, he had braved the dangers, the deadlines of African jungles, he had withstood medicine men like Elijah had withstood the prophets of Baal at Carmel. He had preached, he had translated, he had instructed Africans to read, write, sing and farm. He had exalted Christ and magnified the ministry of a missionary. August 9, 1883, he wound his watch with a trembling hand. "For the last time," he said. And it was so. The next morning the 88-year-old soldier of the Cross was dead, with eighty-four years of life for his Lord since that night as a four-year-old bairn (boy) he had come to Christ.

"For who hath despised the day of small things?"

+Used with permission from Profiles in Evangelism by Fred Barlow, Sword of the Lord Publishers, ©1976.